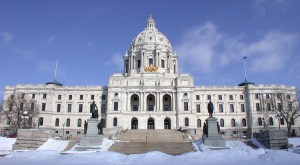 Those of us in the government relations world have heard these themes repeated by legislative leaders since the adjournment of the 2013 legislative session. But, as the Minnesota Legislature prepares to gavel in on February 25, what should Minnesotans really pay attention to?

The drum beat to increase the state’s minimum wage (currently $6.15 or $7.25 per hour) has beat steadily for several years and has only gotten louder in the last year. Framing the increase in the context of a broad economic independence and security message, the House DFL is most interested in a more aggressive increase (up to $9.50 per hour) while the Senate DFL has supported a more modest increase (alignment to the federal minimum wage of $7.75-$8.50 per hour).

The main purpose of the 2014 legislative session is to assemble a bonding bill to address the state’s infrastructure needs. There is general agreement among most Republicans and Democrats that a bonding bill of some size should happen. Like many other legislative proposals, the devil is in the details. The House, Senate and even Governor have slightly different interpretations of a deal reached last session regarding the size of the bonding bill. However, in recent weeks, the details of that deal seem a bit hazy. There are a few things important to each caucus and expect those to factor into many other discussions at the Capitol.

The Senate DFL is strongly committed to continuing 2013 Capitol restoration work and the construction of what is being dubbed a Senate Office Building. House DFL leadership recently has made some strong statements indicating that their membership isn’t fully sold on this idea and could jeopardize the progress of this project.

Governor Dayton declared that 2014 will be the “unsession”  for the repeal of obsolete laws. He has directed state agencies to scour statutes and propose the elimination of unnecessary and outdated provisions in hopes of simplifying our state law books.

In concept, this idea has broad bipartisan support. But in practice, there have already been some rumblings that the exercise has’?t produced real examination of cumbersome state laws which legislators bipartisanly agree could be eliminated.

Many legislators are also looking eagerly at repealing other, less antiquated laws – specifically the three business-to-business taxes (warehousing, farm equipment repair, and telecom capital equipment) passed as part of the 2013 tax bill. The state budget surplus (which some expect will be even larger than project) is encouraging repeal talk on both sides of the aisle.

Expect Republicans to attack MNsur’?s less than smooth roll out and poor enrollment numbers. Heading into the 2014 state and federal midterm elections, Republicans across the country will attempt to connect state legislators to issues polling poorly at the federal level, like ObamaCare.

To some extent, transportation funding has been a recent perennial loser; the state hasn’t made a significant transportation investment since the infamous 2008 veto override. While a coalition for increased funding has a strong base, it is missing the support an important voice: the broad business community. Expect public pressure to mount but little to happen during the 2014 session.

This will receive lots of attention and cause tensions within each political caucus. This isn’t a partisan issue, but is a sticky political issue to tackle. At the very least, expect extensive media coverage of a few legislative hearings; at most, expect some changes made to permit use for extreme medical cases.